The Portland Man Accused of Murdering A Black Teenager Is Connected to A White Supremacist Gang — August 23, 2016 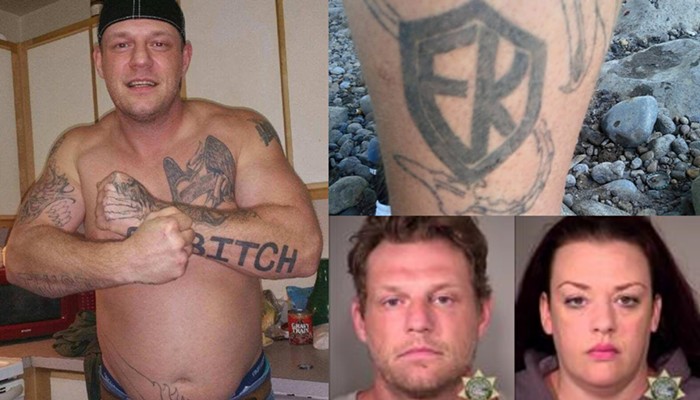 The white 38-year-old Portland man accused of murdering a 19-year-old African American man fleeing from him in Gresham earlier this month has tattoos indicating he’s in “European Kindred,” a white supremacist gang based in Oregon. The Mercury has also found several references he and his associates have made online backing up his connection to the group.

Convicted felon Russell Courtier and his girlfriend, 35-year-old Colleen Hunt, are accused of mowing down Larnell Bruce with their Jeep after Courtier and Bruce got in a fight on August 10 outside of a Gresham 7-Eleven store. Courtier and Hunt were officially indicted for murder on Friday and were arraigned this morning. According to a probable cause affidavit for Courtier and Hunt’s arrest, Courtier admitted to a detective he intentionally chased down and hit Bruce with his car.

Courtier was out of prison on parole for a gun conviction when he killed Bruce, according to court records.

In a separate photo he uploaded of other tattoos, he wrote “511” in the comments, a code for the group where the 5 represents the E, the fifth letter the alphabet, and 11 represents K, the 11th letter. An associate of his also commented on Courtier’s picture, mentioning “us kindreds.”

European Kindreds are a white supremacist prison gang based out of Oregon. The Southern Poverty Law Center issued a long report on them in 2010:

Kennedy first organized the gang within the medium-security Snake River Correctional Institution, the largest prison in Oregon, where he was serving time for burglary. In less than two years, EK had spread to all four other medium-security prisons in the state. In 2001, as members were paroled, it began to establish a street gang presence in Portland. Over the next few years, EK became notorious as members committed hate crimes, murders, rapes and home-invasion robberies, along with manning identity-theft, methamphetamine-distribution and dog-fighting rings.EK now has at least 300 confirmed members in the Oregon prison system plus another 100-125 members on the streets of Portland, as well as in other cities and towns in the region. While the Portland-area street division of the gang — by far its largest outside of prison — is somewhat in disarray after a series of recent arrests of leaders and high-ranking members, the gang overall is expanding beyond the state where it was born. Last year, EK chapters appeared within prisons in Arizona, California, Colorado and New Mexico, and a street crew sprang up and began recruiting skinheads in Orange County, Calif.

Courtier has a lengthy criminal history and has spent time in prison for assaults and illegal weapons charges. He’s was previously convicted of four felonies and three misdemeanors—with seven parole violations—dating back to the late 1990s, according to court records. He was on parole for a felony weapons conviction—scheduled through March 2017—the night he killed Bruce.

Just before midnight on Wednesday, August 10, Courtier and Hunt drove their red Jeep to a 7-Eleven store in Gresham. Outside the store, he and Bruce apparently exchanged words, and got into a fight. During the altercation, Bruce pulled out a “machete,” authorities said, and tried to walk away. Courtier and Hunt then hopped in their Jeep while Hunt yelled “get him baby, get him baby.” They chased after Bruce and intentionally hit him.

Here’s what what Courtier told Gresham Detective Aaron Turnage, according to the probable cause affidavit (emphasis ours):

The Mercury has asked the Gresham Police Department about the alleged machete/knife. We’ll update this post when more information comes in.

Larnell Bruce was motionless on the street with blood flowing out of his head and ears when police arrived. He was taken to OHSU and died three days later.